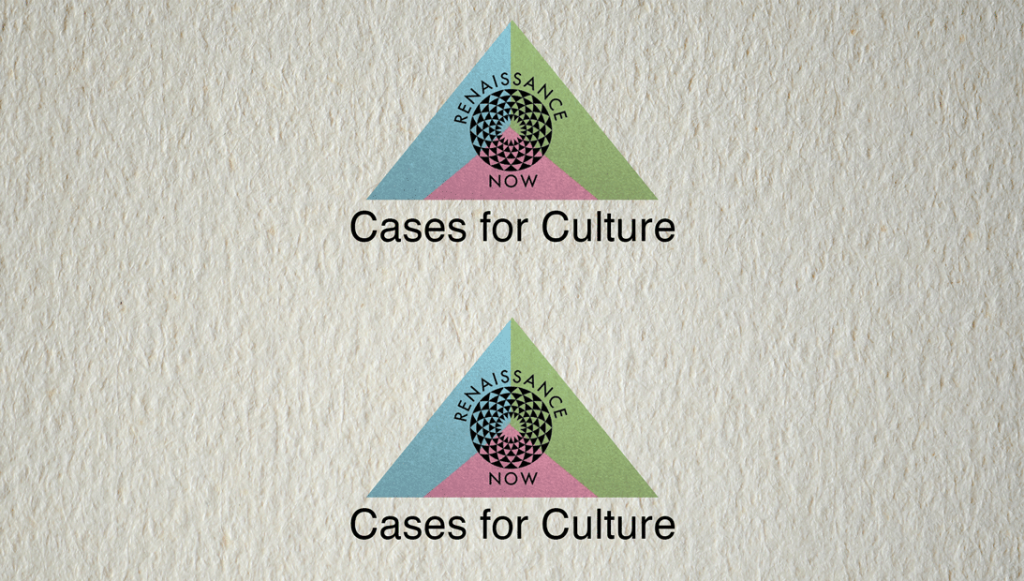 Cases for Culture: A Concept Coined

The arts ignite social change. During the Cases for Culture conference hosted by Cultural Agents at Harvard University, participants put a recurring experience into simple words.

The unapologetic concept of art as a social resource had gestated throughout the Covid-19 lockdown during conversations among heterogenous academics and practitioners who gathered on zoom and decided to launch Renaissance Now. The plague gave us time to think, and we thought about the urgent challenges of social inequity and environmental degradation. Remembering Europe’s medieval plague and Italy’s response as the pandemic waned, when artists and intellectuals left the cloisters to engage with bankers and princes, we worried that today disciplinary silos often keep us from risking necessary collaborations. Renaissance businessmen and politicians risked money and prestige to work with creative artists and thinkers to reshape devastated societies. Later and elsewhere in Europe, the Renaissance would be associated with conquest and slavery. But not in the admirable early period which thrived on private spending for the public good by leading citizens who flouted their prosperity and taste to beautify cities and build institutions. This collaboration between creativity and power is a legacy and a practical lesson for human survival. The future depends on crossing barriers between institutional and artistic structures. Inside the silos change is literally unthinkable. Without curing an aversion to risk, and short of recognizing the arts as agents of change, disciplines will continue to be cautious and to cramp  developments in the theory of change.

Cautiously, commentators of even spectacular cases of arts as agency hardly dignify creativity as a resource for policy making. Consider the revival of Bogota, Colombia, when Mayor Mockus dared to “bring out the clowns” as a traffic intervention, before he targeted drug traffickers and reduced homicides by 70%. Consider too how Edi Rama’s public painting projects revitalized Albania’s capital Tirana and led to his election as prime minister. Citizens and observers do not doubt the impact of art in these and other cases. Yet the cases seem charming, or curious, rather than models of administration. Almost grudgingly, economists have by now recognized the commercial value of art festivals and markets. But their celebration of the orange economy seldom factors in added social values of participatory arts: violence prevention, improved mental and physical health, reduction of dropout rates and teen pregnancies. By dismissing art as an engine for change, we waste this renewable resource for making policy. To misconstrue models as mere oddities is to disable the process of turning experience into knowledge. Our conference helped to take that turn and to ground a collective hunch into a usable concept.

Through research and practice in politics, health, education, law, and entrepreneurship, contributors to the conference demonstrated how the arts emerge as game-changers — even when institutions are slow to include art-making and interpretation among available resources for human development and wellbeing. Presentations converged to suggest that a stigma against the arts — and against the corollary pleasures that art enables — guards the gates of scientific discourse. The stigma is felt with every denial of the evident energy that art can channel toward
personal, public, and planetary care. Art works to change collective perceptions. In a phrase that Raymond Williams offered, art produces a “structure of feeling.” This refers to a still unnamed sensitivity that can be communicated through literature and other creative practices and that generates the need to coin a new concept. “Structure of feeling” is an updated version of Kant’s reluctant respect for the arts. He acknowledged that art can communicate pre-conceptual feelings and reflections, but Kant worried about the process, precisely because it was unpredictable, potentially ungovernable, and unfairly gifted to talented people. Few can make art, but we can all judge it. Kant’s disciple Schiller disagreed and didn’t worry. Facing real terror in the French Revolution, Schiller promoted art as an alternative to violence. Unlike his master who considered artists to be rare birds, Schiller identified a talent for artmaking in everyone. Our innate “playdrive” can channel possibly violent passions toward beautiful new creations, for ourselves and for society. “Symbolic violence” was the therapeutic name for artmaking proposed by child psychoanalyst D.D. Winnicott in the 1960s. Creative play develops personal autonomy and self-expression, he explained. It enables us to take pleasure in the world, to deflect destructive resentment into healthy engagement.

But an unhealthy aversion to pleasure contracts the heart of capitalist culture, according to Max Weber. Over a century ago, he warned that modernity’s Calvinist stigma against pleasure would snuff out our human capacities for sociability and our care for the world. Note that “to care for” means both to love and to serve. Through a careless and self-serving misinterpretation, The Protestant Ethic and the Spirit of Capitalism (1905) has been read more as a manual for heartless accumulation and modernization than as a caution against anhedonic duty. At the Cases for Culture conference, this perverse misstep from Weber’s defense of feeling to dutiful capitalist lockstep came to mind during the morning presentation by James Robinson, an undisputed master of political and economic thought today. Quite boldly, he pointed to a fault-line in the social sciences, namely the inability to account for social change. A culture of capitalism demands to see the numbers but does not tarry at human dynamics which might distract attention from quantifiable evidence. Political science and economics can, for example, document the rise of democratic societies from the 18th century to the present in detailed statistics and attention grabbing graphs. But they do not explain how or why the numbers move from one value to another. There seems to be a hole in the heart of social science.

At this opening, Robinson introduced Jose Falconi, professor of literature and visual arts, who suggested that aesthetics may be the missing piece. Falconi illustrated how the surprise effect of an artwork – the “pow” of a film, or a museum visit, or a poem — breaks through the lethargy sedimented by habit to deaden human associations. The excitement and confusion sparked by art’s novelty enliven dialogue and stimulate collective conversations. People are eager to talk with one another, to interpret and to speculate, once they experience works of art or beauty in nature. They feel and think differently on hearing others speak freely and imagine new engagements. By the afternoon, when economist Pier Luigi Sacco spoke about today’s Culture 3.0 – in which anyone can produce as well as consume art – Schiller’s universally available playdrive was in full gear and urgently required to address otherwise stagnant structures.

Renaissance Now had already noted the longstanding alliance between art and social development. In fact, they are coeval and codependent. In the middle of the 18 th Century, modern democracies and the new philosophy of aesthetics were born together, in symbiosis. Self- governing societies depend on an innate faculty of disinterested judgment, and free judgment depends on the autonomy granted by democratic societies. To follow Kant, aesthetics is the cognitive pleasure of judging, not the initial thrill of perceiving beauty or the sublime. For Kant, the excitement sparked by natural or artistic beauty does not count as aesthetic pleasure. The emotional rush is an entry point, an interruption of routine that triggers a personal reflection which can lead to collective aesthetic judgment, necessarily collective for Kant. The faculty to judge is innate and universal. We can all judge freely — without economic, moral, or intellectual
investments – but this mental muscle had atrophied over centuries of censure in monarchies and churches. Schiller agreed, but he added that art was a better trigger than nature. It is more reliable. Art is intentional and doesn’t depend on seasons or situations. It is a ubiquitous resource to generate curiosity and the desire to talk with others. For both Kant and his spirited disciple, beauty and the sublime lead to reflection and sociability. In other words, art triggers processes that can change political opinions and behaviors.

Highlights of the stellar contributions shared in Cases for Culture  can be appreciated in the recorded talks that will soon be available on our website. See the program to appreciate the range and stature of the participants. Please prepare to write your own Case for our collection in Renaissance Now. Professor Rob Austin, formerly at the Harvard Business School and currently at the Ivey School of Business will host a training session for us in the New Year. Stay tuned!

We use cookies on our website to give you the most relevant experience by remembering your preferences and repeat visits. By clicking “Accept All”, you consent to the use of ALL the cookies. However, you may visit "Cookie Settings" to provide a controlled consent.
Cookie SettingsAccept All
Manage consent

This website uses cookies to improve your experience while you navigate through the website. Out of these, the cookies that are categorized as necessary are stored on your browser as they are essential for the working of basic functionalities of the website. We also use third-party cookies that help us analyze and understand how you use this website. These cookies will be stored in your browser only with your consent. You also have the option to opt-out of these cookies. But opting out of some of these cookies may affect your browsing experience.
Necessary Always Enabled
Necessary cookies are absolutely essential for the website to function properly. These cookies ensure basic functionalities and security features of the website, anonymously.
Functional
Functional cookies help to perform certain functionalities like sharing the content of the website on social media platforms, collect feedbacks, and other third-party features.
Performance
Performance cookies are used to understand and analyze the key performance indexes of the website which helps in delivering a better user experience for the visitors.
Analytics
Analytical cookies are used to understand how visitors interact with the website. These cookies help provide information on metrics the number of visitors, bounce rate, traffic source, etc.
Advertisement
Advertisement cookies are used to provide visitors with relevant ads and marketing campaigns. These cookies track visitors across websites and collect information to provide customized ads.
Others
Other uncategorized cookies are those that are being analyzed and have not been classified into a category as yet.
SAVE & ACCEPT
Powered by